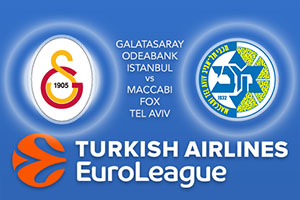 With both of these teams featuring in the bottom three of the Euroleague, this is a must-win game, particularly with this Tuesday night clash being the first of a double-header this midweek. The hosts are bottom with a 5-13 record while Maccabi are third bottom with a 6-12 record, only EA7 Emporio Armani Milan splitting these sides.

These teams have met five times on Euroleague action so far and it is the Israeli side who holds a strong upper hand, with a 5-0 record. This is something that Galatasaray will be desperate to smash this midweek and they will also want to gain revenge for the result earlier on this season. Maccabi won that game 98-92 in Israel, on the back of 23 points picked up by Sonny Weems. Galatasaray received a boost from Vladimir Micov, who offered 18 points in the game but the leading player for the Turkish side was Justin Dentmon who grabbed 22 points. Sadly for the Turkish side, Dentmon is no longer with the team.

Maccabi have been dire in Euroleague of late

The hosts have lost five of their last six outings while Maccabi have just one win in nine games, so both sides are desperate for the win in this game.