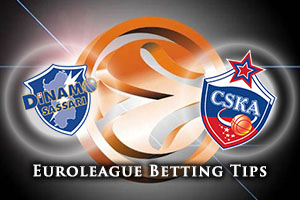 This may be the first time that these two sides have met each other but it certainly isn’t the first time that CSKA Moscow have played in Italy. In fact, of their last 14 trips to Italy, the Russian side have won 11 matches. Add in the fact that Sassari has played at home against Russian sides twice in their history and failed to win both and it looks as though it is going to be an away win in this game.

Of course, given the fact that CSKA Moscow can call on players like Milos Teodosic, Nando De Colo and Aaron Jackson, you know that they are going to score points. De Colo has reached double figures in his last six games in the Euroleague and he has also bagged 13 free throws in a row. Add in the fact that he has netted at least one three-point effort in the last of his seven games and you have a player who is bang on form. Mind you, Teodosic has notched 25 free throws in a row and has made at least one three point shot in his last 25 Euroleague games. This is a team that delivers a high level of form and consistent week in and week out.

Sassari have top players too

It is expected to be a sell-out crowd in Italy on Friday and this is building up to a game with a cracking atmosphere. The Italians have some big game players too. David Logan has notched at least one three point shot in his last 13 games. Sassari also have Denis Marconato who is just 33 boards short of grabbing 1,000. Add in the fact that Joe Alexander has notched 11 free throws in a row and you have a team who have plenty of confidence that they can play well and grab some points.