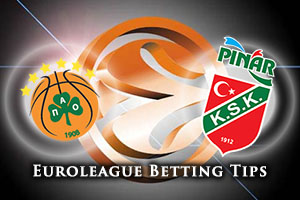 This is the first ever meeting between these two sides but it will be the fifth time that Pinar have played in Greece. At the moment, they hold a 1-3 record in Greece but that victory came last season, in a victory against PAOK Thessaloniki, in a match in the Eurocup. As for Panathinaikos, their home record versus Turkish teams stands at 21-2, and this includes 11 wins in a row.

The last time the team from Athens lost at home to a Turkish side came back in the 2005/06 season when they lost out to Efes Pilsen. They come into this game on the back of an opening round defeat but they will be confident that they can bounce back in this game. As usual, you can expect Dimitris Diamantidis to be on form for the hosts and Nick Calathes is a reliable player too. Diamantidis is just 6 points off the 9th place in the career scoring charts in the Euroleague. Going into this game, he has notched up 2,322 career points in the Euroleague.

Pinar come into this game on a massive high after defeating FC Barcelona Lass in the opening round of fixtures last week. There aren’t many better ways to make an entrance than by that win but the Izmir players will be keen to show that it wasn’t just a flash in the pan. They may not have too many players with impressive stats in the Euroleague but you can expect Colton Iverson and Kenny Gabriel to be at the heart of what is good for the Turkish side. Gabriel grabbed a double-double last week and he will be gunning for more of the same this week.

The hosts are favourites for this game and you can find Panathinaikos with a -8 handicap, at odds of 1.90. For the Over/Under market for this game, you will find that going OVER 147.5, at odds of 1.90, is likely to be a decent bet to maintain an interest in this one. Bet Now!