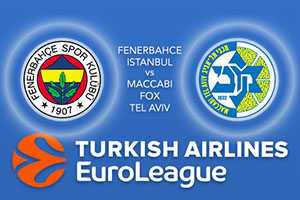 With the away team already out of contention for the Euroleague playoffs and the hosts chasing down their playoff spot, you would be forgiven for thinking that this was going to be a straightforward game on Tuesday night. This is the first of the Euroleague action of the week and with a double-header of fixtures lined up, there is plenty in store for basketball fans to look forward to.

While there will be plenty of European basketball fans hoping that Fenerbahce slip up at home to Maccabi, there is a sense of acceptance that the Turkish side will prevail and book their place in the next stage of the tournament. The team that finished runner-up last season are looking good once again and the Turkish side will fancy their chances of making the Final Four once again and by the time you get to that stage, anything could happen.

Maccabi are out of the Euroleague playoff running

The away team holds the upper hand in clashes between these sides this century. There have been 14 games between the teams and Fenerbahce have only won four so far, so there will be some nerves on display in this game. There is also the fact that Maccabi  Tel Aviv won the clash between these teams earlier on in the season, triumphing by a score of 87-77. Sonny Weems was a huge player in that game, grabbing 22 points, but given that Weems is no longer with the Israeli side, the Turkish team won’t have to worry too much about him causing them harm.