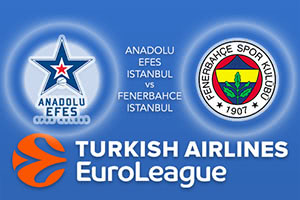 There’s another Istanbul derby in the Euroleague this week as the second leg of the double-header action takes place. Fenerbahce lost in the earlier game this week but they secured their playoff spot when one of the chasing teams outside of the zone lost. That takes some of the pressure off of the away side in this game but that pressure is still very much on the hosts. Anadolu are looking good but they have to get over the line, so they need to see this game as an opportunity to book their place in the next stage of the Euroleague tournament.

This game should also be seen as a chance for Anadolu to get some revenge on Fenerbahce. The two teams are very familiar enemies in domestic basketball but they have met on seven occasions in European action and Fenerbahce have won every single time. Turning a 0-7 record into a 1-7 record may not seem like a massive step forward but it is something that Anadolu will be desperate to do this midweek.

In the previous Euroleague clash between these sides, Fenerbahce came out on top by a score of 88-80. There was a big showing from Kostas Sloukas, who offered 21 points that night, but he is currently injured and won’t be able to have an impact on this game.

Fenerbahce are in the Euroleague playoffs