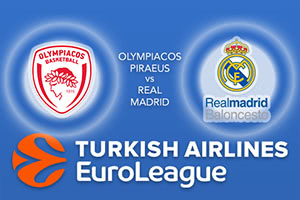 Ordinarily, this would be an absolutely huge game in the Euroleague between two teams who are battling it out at the top of the table and who have a huge history between them. However, there will be a feeling that Olympiacos, with a 19-8 record so far this season and Real Madrid, with a 20-7 record at this point of the campaign have done the hard work in the regular season. Both sides have guaranteed home advantage in the next stage of the tournament, so this game may lack some energy and excitement that you would normally associate with it.

These teams have met 24 times this century and it is the Spanish side that has a narrow advantage, holding an 11-13 record. The two teams clashed in the first week of this Euroleague season and it was Real Madrid that grabbed the victory in Spain by an 83-65 margin. Sergio Llull was in fantastic form in that clash, offering 22 points in the win.