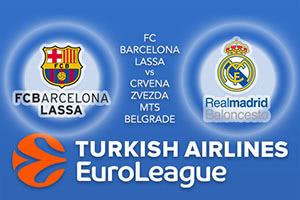 The real importance of this game may not be clear until it is time to tip-off but there is a chance that this could be a disappointing night for two teams who will likely look back on a season of regret and letdowns. Barcelona are out of the running for a playoff spot and they will only be playing for pride and to put a smile back on the faces of their fans after a disappointing loss earlier on in the week. As for Belgrade, they may be able to book a spot in the playoffs if Darussafaka lose earlier in the evening. If that occurs, there is likely to be a lot more passion and desire in the away team in Catalonia on Friday night.

The teams have met on three occasions so far and it is the Catalan side that are 2-1 up at the moment. However, it was the team from Belgrade that won the clash earlier on in the season with a 76-65 score line. Marko Guduric was in fine form in that game, offering 21 points in the victory.

Barcelona are in terrible shape heading into the game and have lost a lot of games of late, too many that the Catalan faithful would like to recall. The Catalan club also holds the poorest offensive record in the league, only offering an average of 71.6 points per game. Mind you, the side from Belgrade can only an average of 74.4 points per game, making them the second poorest team in the league with respect to offensive play. This is not a game that is shaping up to be one with a lot of points.

Crvena could enjoy their Euroleague night