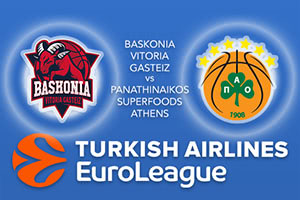 Both of these teams hold a 16-11 record in the Euroleague so far this season and more importantly, both teams have booked their place in the next stage of the Euroleague tournament. This should be a game with plenty at stake as a win here will give the victor an improved chance of moving up the table and it could also provide a psychological blow when it comes to gearing up for the playoffs.

There is a great deal of history between these sides and this game is going to be their 21st clash in European competition. The teams have both won 10 games each so whoever comes out on top in this game will have the slight advantage between these sides. It was a close run thing when these teams met the last time, with Panathinaikos winning by a score of 69-68. Chris Singleton had a big game that night, grabbing 23 points and if he can deliver the same sort of showing in this game, it could be a fun night for the away side.

Panathinaikos have enjoyed this Euroleague season so far

This match could go either way but back Baskonia Vitoria Gasteiz at -5, which is provided at odds of 1.90. If you’re looking for the Over/Under market, go OVER 154.0 which is on offer at odds of 1.90. Bet Now!