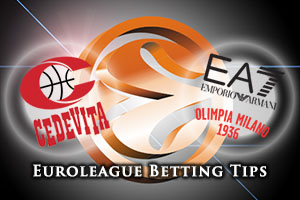 There is only one Top 16 spot left in Group B and if Cedevita win the game, they will grab the final spot without looking to others for help. However, they could still qualify depending on the margin of defeat, which means that Milan have to go all out for victory.

Having a 4-4 record and a two game lead over the two teams beneath you in the group stages gives you a bit of confidence but Cedevita have to know that their work isn’t over yet. In some ways, knowing that they can afford to lose by a narrow margin could be of benefit, but it could also work against them. There is going to be a lot of psychological strength needed by the Zagreb players to ensure that they get the result that they need on Friday night. The home crowd is certain to roar their favourites on but it may be a night for cool heads as opposed to reckless abandon in an attempt to win a basketball match.

If Milan wins by 8 points or more, they will be very much in contention going into the final game of the regular season but if they fail to achieve this victory, their Euroleague action will be over. It hasn’t been a great season for the Italians but the return of Alessandro Gentile on Friday night will give the Milan side some confidence that they can achieve the big win that will keep their hopes alive. Other players like Jamel McLean, Stanko Barac and Robbie Hummel will also need to add to the Milan firepower if there is going to be an upset in Zagreb.

The home side are the favourites for this game but not massive favourites which means that taking EA7 Emporio Armani Milan at +3, at odds of 1.90 could be of benefit. If you are looking to get involved with the Over/Under market in this game, you should consider going UNDER 152.5 which is available at odds of 1.90. Bet Now!