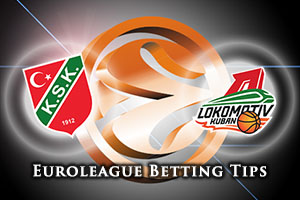 Bottom plays joint top in this one and both teams already know what they will be doing after the New Year with respect to European basketball. The home team with a 2-6 record will be dropping out of the Euroleague into the Eurocup, so this is their final Euroleague home game of the season. As for Lokomotiv, with a 6-2 record, they’ll be in the top 16 and they know that top spot in Group C is still there for the taking.

Pinar have a very strong defensive record, only allowing an average of 66.3 points per game this campaign, which is the third lowest in the Euroleague. Sadly, Pinar have only been able to grab an average of 64.3 points per game, which is one of the lowest in the league. They will be looking for more from Colton Iverson and Justin Carter in this game as they will surely be determined to see out the season in as fine a shape as possible. It is possible for the hosts to climb off the bottom of the group and this will surely be their aim this week and next week in the Euroleague.

Lokomotiv have to be playing for top spot in Group C

These two teams clashed last month and Lokomotiv ran out 72-53 winners in Krasnodar. Malcolm Delaney and Evgeny Voronov were in excellent form as both players grabbed 15 points in the win. While both teams have strength in defence, Lokomotiv can also boast of the third best attack in the league, averaging 76 points per game. Knowing that top spot is up for grabs should be enough to inspire Lokomotiv in this game and while the hosts will likely be motivated in front of their home fans, the away side should have enough about them to grab a win in this game on Thursday night.

You’ll find that the away team should have enough about them in this game and you can take Lokomotiv Kuban Krasnodar at -4.5 at odds of 1.90 on Thursday evening. If you are keen to enjoy the Over/Under market, look to go OVER 145.5 at odds of 1.90. Bet Now!