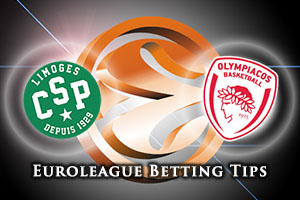 Its bottom versus top in Group B and this will be the final home game of the Euroleague campaign for Limoges CSP. This means that they will be keen to grab a win for the fans but Olympiacos come to France looking for a win that will allow them to grab top spot in the group. This is a game that could be more exciting than many people think.

The big problem for Limoges this season has been their defence. They have the lowest ranked defence in the league, shipping an average of 84.8 points per game, and it is no surprise to see that they have struggled for wins this campaign. With a 2-6 record, it has been a particularly depressing season but this doesn’t mean that they haven’t had good players on decent form. Nobel Boungou-Colo has stood out on many occasions while Ali Traore has shown some sparkle and talent throughout the campaign. The French team know that this is the final chance to give their fans something to cheer at home and this could be the motivation they need to do some damage on Thursday night.

The Greeks have top spot in their own hands

Olympiacos will be without Vassilis Spanoulis but this doesn’t mean that they will be unable to reach the heights that many people expect from them. New signing Shawn James has added a level of intensity to the team and with players like Georgios Printezis and Othello Hunter in good form this season, you can see why the Greek side are in good confidence heading into the Top 16. This is a game that they will be keen to take care of quickly, allowing them to put on a display in the final game without having to worry about clinching top spot in the group.