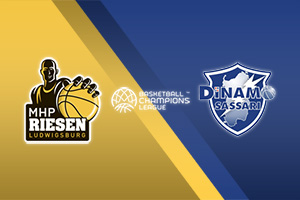 Ludwigsburg returns to the Basketball Champions League, a competition in which it reached the 2017/18 season Final-4 that was held in Athens, Greece. American head coach John Patrick will be on their bench for a 9th consecutive (!!!) season, while he was named coach of the year last season.

Ludwigsburg counts 23 wins in its last 24 games at home, regardless of the competition they participate in.

BBL’s best player and MVP, guard Jalin Smith, left in the summer (he joined Alba Berlin). At the same time, there is an issue inside the paint, after the unexpected departure of big man Oscar Da Silva (who also joined Alba Berlin). The gap that Da Silva left behind was filled by Justin Simon of Ulm, who will be available for tonight’s game. However, MHP Riesen is having a mediocre start of the season, as, after the home defeat from Heidelberg, they have also been kicked out of the German Cup (by Crailsheim).

Sassari will try its luck in the BCL again this season. Last year they suffered from covid – 19 and were eliminated in the stage of «16». However, they managed to sign Igokea’s explosive guard, Clemens, who averaged 15 points in the BCL last year. Sassari started the season a month ago, with coach Demis Cavina on the bench. They had managed an astonishing 4/4 in the groups of Supercoppa but were defeated in the quarterfinals by Brindisi. They faced Brindisi again last Saturday for the Italian championship, and they lost 89-80 (away). They are now at 1-1 in the domestic league, and they have travelled to Germany with a complete squad.