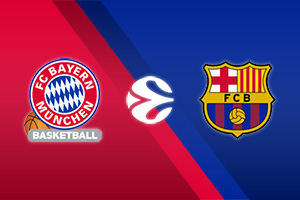 Bayern held tight the victory in Tel Aviv against Maccabi at the Euroleague opening (+11, 6 minutes before the finale). Still, Andrea Trinchieri’s team saw Scottie Wilbekin scoring the Israelis’ last 10 points (out of his 28 in total) while the Bavarians missed twice in the end with Deshaun Thomas and Hilliard. So naturally, they lost a game that could be called theirs (69-68). And now they have to face the psychological consequences.

The absence of three key players can be an excuse, and it proved very important for the Italian coach: Lucic (F), Dedovic (G), Radosevic (C) are all out. According to Trinchieri, the three players will also lose tonight’s game.

Barcelona has started the season in both the Euroleague and the ACB in an impressive way. In the Euroleague opening game, the Blaugrana defeated Alba Berlin 96-64, with Sarunas Jasikevicius using all his players, splitting participation time almost equally. Mirotic was the MVP for his team in one more game, with 22 points and 100% accuracy in the shots he attempted! After he underwent surgery, experienced guard Alex Abrines remains out of action and will return in early January 2022.  Turkish center Sertac Sanli suffered a sprain and did not travel to Munich.