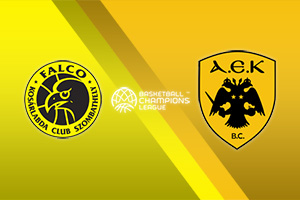 Hungarian champions, Szombathely, are competing in the BCL for the third year in a row. Winning the title in their country has “opened the door” to European competitions. Coach Milos Konakov was credited with this success and will remain on Falco’s bench for a 5th  consecutive season. Worth noting that 10 of the 12 players on the roster are Hungarians, something not so familiar for a European team these days. Center Boris Barac and American power forward Marvin Clark stand out, with the latter also known for his excellent shot from a range.

A transitional season has just started for AEK, with the focus on getting their finances in order. We are talking about a practically new team and a coach (Stefano Dedas returning to Greece after a decade abroad. Dedas is the kind of coach who loves offensive basketball, with his teams being the definition of the run & gun style.

Experienced Spanish guard J. Colom and talented guard Brian Angola stand out. In addition, guard Nikos Pappas returns to the courts after an injury that kept him away for months. Last but not least, Serbian Stefan Jelovac will be called to do the job inside the paint (or even with his shots from the perimeter).