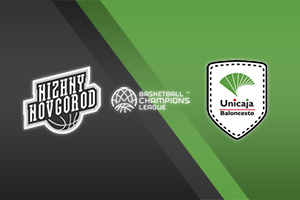 Nizhny hosted the Final – 8 of the Basketball Champions League last season but did not manage to overcome the obstacle of Zaragoza in the quarterfinals and was left out of the semis. Of course, it was already a great success that they reached the F-8, but Nizhny missed a unique opportunity to achieve something better playing at home…

Zoran Lukic has remained at their bench since the 2017-18 season; last year led the Russians to their first F-8 in history and was named top coach of the tournament. Experienced Latvian power forward Rolands Freimanis, Russian guard Mikhail Kulagin and small forward Pavel Antipov stand out from a relatively rich roster that will be at the disposal of the Serb coach ahead of tonight’s game.

Malaga moved to the Basketball Champions League after almost 20 years in the Euroleague competitions (Eurocup – Euroleague). What a downgrade, really, and everyone is eager to see if they will do better in a somewhat inferior tournament. Since last January, Fotis Katsikaris has been on the bench, replacing Luis Casimiro halfway through the 2020-21 season. This season has been a slow start for the Andalusian team in ACB (record 2-2). Malaga didn’t make a lot of changes in its roster compared to last year. French small forward Axel Bouteille, guard Jaime Fernadez, Nigerian center Michael Eric and American playmaker Norris Cole are the most valuable «tools» at the disposal of the Greek coach.