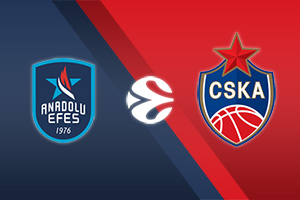 Ergin Ataman did not like the way his team played against Real Madrid in Spain last week. The Turkish coach stated after the match that his team probably travelled to Spain for tourism, thus wanting to wake up his players for the demanding games that follow. And tonight’s clash against CSKA is one of those.

The Turks lost indeed very easily to Madrid (82-69). The “only” players that came out on the court to play were Shane Larkin (21 p., 6 as.) and the super talented Serbian center Filip Petrusev (17 p.), a recent transfer for Efes. Last Saturday, Efes reacted and “destroyed” Besiktas (101-55) for the Turkish league.

CSKA had a great start in the game against Armani in Milan, but the in-game injury of its main center, Nikola Milutinov, “cut their wings,” and they lost a game that they could have otherwise won 84-74. The Serb will be out of action (again) for 2 months, with a knee problem this time! For the Russians, Danish guard Iffe Lundberg with 13 p., 7 rb. and 6 assists was the MVP in the last game