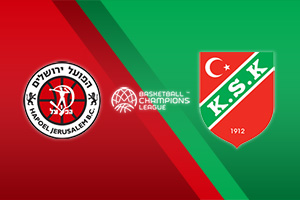 Hapoel was very active in the transfer window last summer, and it will surely come out stronger in this year’s competitions. After a previous mild season, they would want to have a leading role in this year’s BCL. However, just a few hours ago, one of the most important transfers of the summer period, Canadian forward Bennett (formerly no. 1 draft in the NBA), announced to the Israelis that he wanted to leave the team! At least Hapoel will still have Oren Amiel on its bench, the “creator” of the excellent Nymburk squad.

Premiere tonight for Karsiyaka, the team that reached the final last season but lost the trophy to Burgos. Successful coach Ufuk Sarica remains on the Turkish bench. However, Karsiyaka will be stronger after they acquired guard Blackmon (who impressed last year playing for Besiktas) and Colson (Basketball Champions League’s MVP the previous year while playing for Strasbourg).

They also announced that experienced guard Michael Roll joined the team last week and is considered by Sarica for tonight’s game. Impressive start for Karsiyaka in the Turkish league, with two easy wins against Petkimspor and Bahcesehir.