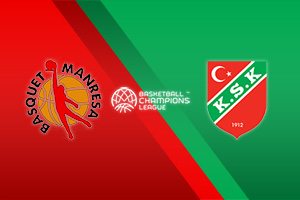 Manresa has significant momentum; the Spaniards count 5 wins in the last 6 games for the ACB and the BCL! Last Saturday against Burgos, the team of Pedro Martinez got a significant victory (82-90, on the road) and went up to a 5-4 record in the Spanish league. Fantastic match by guard Sylvain Francisco who finished with 28 points and 5/8 3 point shots. In the BCL, they are on a 3-0 record. With the win at the home of Karsiyaka (67-72), Manresa has become the favourite for the group’s first place. All players are at the disposal of experienced coach Martinez.

Karsiyaka is also in good shape. Despite the defeat by Manresa in the BCL, they came back and with 2/2 wins in Turkey, they remained at the top of the league with a record of 6-1. The last victory was against Merkezefendi (73-81). Ufuk Saritsa’s team had James Blackmon Jr. as the top player with 24 points and 5/7 3 point shots. Karsiyaka has signed veteran American center Alex Tyus, who is expected to make his debut tonight in Spain. Karsiyaka will not have today coach Saritsa on the bench since he has received a two-match ban.