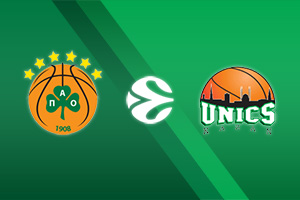 Exactly one week after collapsing in Belgrade, Panathinaikos (2-6) hosts Unics Kazan (3-5) tonight. The Greens will try to close some of the “wounds” left on their “skin” after the embarrassing defeat (81-48) in Serbia, the heaviest in Panathinaikos’s history in the Euroleague and a reminder that this year can be a nightmare for the six-time title winners.

On the other hand, the Russians travelled to Athens to continue on their improvement path;  two wins and one defeat at Astrobal last week, after fighting till the end. The Russians undoubtedly have a roster that can achieve more. This will be an exceptional game for Mario Hezonja. The 26-year-old Croatian forward is returning to OAKA as an opponent to face his former team, of which, as he has stated, he is a fanatic fan! But the Panathinaikos fan doesn’t think the same after the Croat decided to leave last summer, obviously tempted by the improved salary that Unics offered.

D. Priftis will also play against his former team tonight. He will wait until the last minute to find out if valuable Serbian guard Nrmania Nedovic will be ready. On the other hand, the absentee list of Velimir Perasovic is empty.