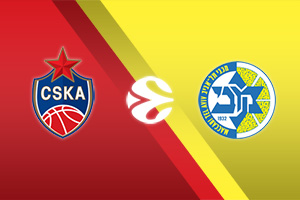 Something is wrong with CSKA… Dimitris Itoudis’s team counts five consecutive defeats in the Euroleague and the VTB League, which is happening for the first time in the last 20 years! The last one was from Unics in Kazan (69-64) last Sunday. In the Euroleague, their record has dropped to 4-4, and they are at the 9th place in the standings table. Itoudis couldn’t be happier to see that tall Georgian man Tornike Shengelia is back in action. And Serbian center Nikola Milutinov feels better also. But quality Lithuanian guard Marius Grigonis remains out.

After two consecutive away victories in the Euroleague and an equal number of defeats in the Israeli league, Maccabi travelled to Moscow for the crash-test against CSKA. G. Sfairopoulos’ team comes from an easy victory in Vitoria over Baskonia (69-87), bringing the People’s team to 2nd place, together with four other teams at 6-2. On the other hand, they lost to Hapoel Holon 88-82 (on the road) in the Israeli league, but played without Wilbekin, Zizic and K. Taylor (resting).