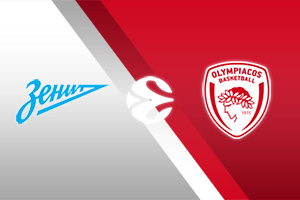 Olympiacos will be tested this afternoon in St. Petersburg. The Greeks (6-2) travel to Russia to face Zenit (5-3).

Olympiacos felt some pressure during the game against Monaco in Faliro. At the end of the first quarter, they were down 17-27. But then everything went perfectly for the hosts (86-65 final score), mainly due to their defence that is the second-best in this year’s tournament. Olympiacos is also third-best in turnovers committed, with only 11.6 points per game. In the battle with the French, Tyler Dorsey and Jean-Charles (from 18 points) stood out, while the match ended with a double-digit number of points for Walkup and Papanikolaou (11 points each). In addition, excellent Sasha Vezenkov managed a double-double with 10 points and 10 rebounds. There are no problems with absences for coach Bartzokas ahead of tonight’s game.