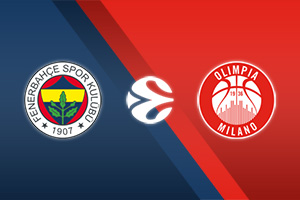 After losing four consecutive ones in detail, Fenerbahce (3-5) finally managed to win a big game (against Panathinaikos, Barcelona, ​​Real Madrid and Olympiacos). Last week, the Turks left Moscow victorious, beating CSKA 91-82!  Nando De Colo (18 points) was decisive in the end, with two big three-pointers! They also continued with good performances in the Turkish league, playing without Polonara (rest), Barthel and Pierre (injured). Although these Fener defeated Gialova 86-60 at home. Polonara will play tonight, Barthel remains out, and Pierre is highly doubtful for the team of coach Sasa Djordjevic.

Armani Milano (7-1) has been enjoying their loneliness at the top of the standings table since last week, after beating their former «roommate» in the first place, Barcelona (75-70, at home). Ettore Messina’s team did the job in the end, thanks mainly to crucial baskets by Datome (17 points) and Shields (12 points). In Lega A, Armani beat Cremona 93-86 on the road and remained undefeated, despite playing without Hines (rest) and injured American veteran guard Malcolm Delaney (10.2 points, 3.2 assists). Delaney will not make it also for tonight’s match.