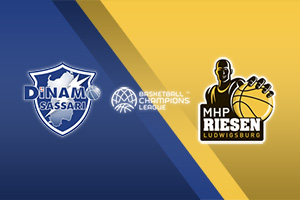 Things keep getting worse for Sassari this season. The team from Sardinia counts four consecutive defeats in the Italian league and the BCL. On Saturday they were inferior to Trieste, a fact that can be confirmed by the final score (74-83). Coach Demis Cavina is disappointed with the image of Sassari, but seems completely unable to react. In the game against Trieste, only Jason Burnell (PF) stood out but his 13 points were far from enough. On the positive side, center Ousmane Diop is returning to action tonight after staying out for five months. In the BCL Sassari stands with the back to the wall; they count three losses in an equal number of games (0-3). The home defeat by Prometey last week looks like the final blow and tonight’s game against the Germans can be considered their last chance.

Last Friday was a day to forget for Ludwigsburg; they suffered a shock defeat at home by Chemnitz (74-76) for the German Basketball league. The team of American coach John Patrick fell to 4-3 in the BBL, while it is worth noting that they have been defeated only for the second time in the last 31 games in front of their own crowd. In the BCL however, Ludwigsburg experience is prominent. The team counts three wins in an equal number of matches and is the big favorite to win the first place in the 1st group (Ludwigsburg 3-0, Tenerife 2-1, Prometey 1-2, Sassari 0-3) and the qualification to the last “16”. The Germans travelled to Sardinia without absences.