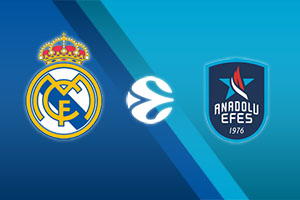 Real Madrid showed some real character in the decisive “final” of the regular season against Fener in Istanbul. But now things have changed again, and the situation in this year’s Euroleague seems irreversible for the Madrilenians. They had travelled to Turkey with an ultimate goal to “break” the series while it was still in the first two games; Instead, they did suffer from two harrowing defeats (Game1: 90-63, Game2: 91-68). And that’s not all; Pablo Lasso, their somehow desperate coach, will need to decide in the last minute whether Walter Tavares, the team’s most valuable player, shall play in tonight’s game. The center from Capo Verde is facing a problem with his foot and has already been playing with this injury in the last few games. No one can tell if he will step on the court tonight, in what might be the final game of the season for the Galacticos. His presence can change the game’s balance, so Lasso will have to make a pretty tough, last-minute call!

The Turks showed “Real” strength in the first two games at home! They were dominant in almost all areas of the game and are ready to check the ticket for the Final 4 in Cologne! Coach Ataman was utterly satisfied by the team’s performance and praised his players in the press conference after the game. Star/playmaker Shane Larkin is in fantastic condition lately, and no absences are reported before the clash in Madrid!