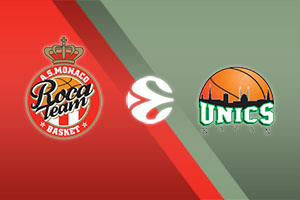 At the beginning of the season, not many believed that Monaco would go all the way to the end of the tournament, the finals of this year’s Eurocup. The Monegasques kicked out the Spaniards of Gran Canaria in the semis and are ready for Moment of Glory.

The same perhaps can be said for Unics, the team that eliminated in the semi-finals the big favourite of the tournament, Virtus Bologna. A team that invested a lot of money and acquired star players such as Teodosic and Bellinelli. And which eventually missed the Euroleague 2021-22 train!

The series of the Eurocup finals, the second-ranked European basketball tournament, starts tonight in the Principality of Monaco. The title will be decided in two victories. The following two games – if needed – will be both played in Kazan.

On the opposite side, the Greek coach of the Russians, Dimitris Priftis, does not face the slightest problem. He has a high-quality roster at his disposal, with several players standing out: Canaan (PG), John Brown (F), Okaro White (F), Nate Wolters ( PG) and this year’s Eurocup MVP, scorer Jamar Smith.