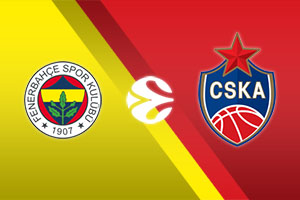 Decimated due to the very significant absences, Fenerbahce left Moscow empty-handed last week. They suffered two defeats from CSKA (92-76, 78-67), and the only thing worth keeping from those games was the “moving” effort of the remaining players that were available and played. De Colo scored 27 points out of his team’s total 76 in Game 1; while Guduric scored 27 out of the total 67 in Game 2. Eddie, the great scorer, Bobby Dixon, the valuable guard and Ulanovas, the forward, are out of action again. Center Veseli is doubtful, but there are chances to play tonight. Given the importance of the game, our money is that the Czech will be there for coach Koloskov during the “darkest hour” for Fener!

Since the “Best-out-of-five” system was introduced in the Euroleague playoffs in the 2008-09 season, no team has ever returned to qualify from 2-0 behind in any series! Led by the 34-year old guard Daniel Hackett (20 points/14 points, 9 assists), the Russians cleared the first two games relatively easily, exploiting the empty roster of Fener. Starting center Milutinov is out for the rest of the season, and tonight his substitute, big man Bolomboy, is also doubtful.