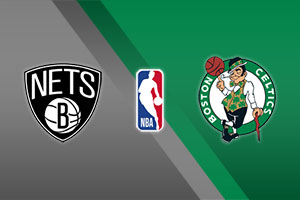 This season’s super ambitious Brooklyn Nets entered the court for Game 1 a bit more relaxed than they should. Luckily for them, they woke up from the 2nd period onwards and dominated the game. Series is now at 1-0 for the Nets, with qualification to be decided in 4 victories.

Kevin Durant (32 points), Kyrie Irving (29 points) and James Harden (21 points) did the… job for Brooklyn. And it looks that the Holy Triad of Brooklyn is ready to perform according to expectation.

In fact, K.D. also had 12 rebounds; 9 were collected by Harden, while the Beard finished the game with 8 assists.

All the «heavy weapons»  are at the Nets’ coach Steve Nash’s disposal for tonight’s game. Joe Harris, Blake Griffin and Jeff Green are also expected to take time on the court. One fundamental absence for the Celtics of Brad Stevens injured Jaylen Brown (24.7 points 6.0 rebounds, 3.4 assists on average), who loses the rest of the season and is without a doubt a game-changer for the team from Boston.