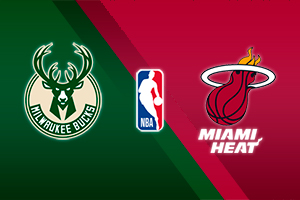 After a nerve-wracking game on Saturday night, the Bucks left the court victorious and are now leading 1-0 in the series against the Heat. It’s the first round of the Eastern Conference playoffs, and the winner will be decided in four wins!

Milwaukee needed the extra five minutes of overtime to prevail (109-107) and a buzzer-beater by Khris Middleton (27 points)! Mike Budenholzer’s superstar Giannis Antetokounmpo scored 26 points and scooped 18 rebounds, but was totally off target outside the “paint” (0/14!). We need to note also that he only had 6/13 free throws. Precious Brook Lopez added 20 points and 8 rebounds) while lead guard Jrue Holiday assisted with 20 points and 11 rebounds. The “Deers” disappointed with their percentage outside the 7.25 m. line. 5/31 and 16.1% aren’t good enough if you want to have serious aspirations for the NBA ring.

Miami, on the other hand, scored 20/50 three-pointers but left the floor empty-handed! Goran Dragic (25 points, 5/10 three-pointers) and Duncan Robinson (24 points, 7/13 three-pointers) paved the way for a victory that was so close at the end. With 10 rebounds and 8 assists, Jimmy Butler was meant to help with scoring, but he missed many relatively easy shots. 9 points, 12 reboubds and 8 assists. was the contribution of Bam Adebayo. Victor Oladipo has been ruled out of action until the end of the season for Erik Spoelstra’s team.

Its quite unlikely that the Bucks will appear as inefficient outside the 7.25 m. line as they appeared in Game 1…