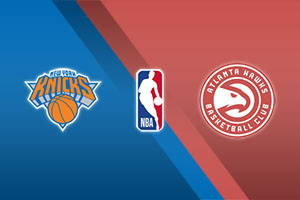 The Knicks (41-31) return to the postseason for the first time since 2012-13, while the Hawks (41-31) have been waiting since 2017 to achieve the same. It is a critical moment, especially for the Knicks fans, as they endured many humiliations in recent years: negative records and no… contact with the playoffs in the East. Still, great coach Tom Thibodeau led them to safe paths in his first season on their bench. Undoubtedly, he deserves a lot of reward and recognition.

The Knicks announced that they sold 15,000 tickets for the first two games against the Hawks. The famous New York organization stressed in the same announcement that about 90% of the spectators of these two games would be fully vaccinated against Covid-19. Coach Thibodeau has no problems with injuries, underrated PF Julius Randle (24.1 points, 10.2 rebounds, 6 assists) has a career season this year, point guard Derrick Rose has a lot to offer with his experience (14.2 points, 4.2 assists) and the Knicks aren’t in the playoffs for the pride of participation.

Atlanta has travelled to NYC without any significant absences. The team owners have decided to sign a new contract with remarkable coach Nate McMillan, who managed to transform the Hawks to the better as soon as he was promoted to first coach. Trae Young (25.3 points, 9.4 assists), Clint Capela (15.2 points, 14.3 rebounds), Bogdan Bogdanovic (16.4 points), Danilo Gallinari (13.3 points), and experienced guard Lou Williams (11.3 points) stand out for the Hawks. And of course, talented forward John Collins (17.6 points, 7.4 rebounds).