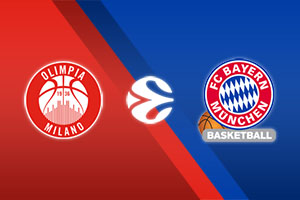 What a fantastic Game-1 that was! Armani came back from “the dead” (they were down by 19 points in the second period) and defeated Bayern in Milan (79-78), thanks to a buzzer basket by Zach LeDay (17 points, 7 rebounds)! Matches like this can make every fan love basketball!

The Spanish “Magician” Sergio Rodriguez (13 points) was decisive in the second half for the team of Ettore Messina and scored some vital points, especially when the ball was “burning”. The Italians are complete again, with nothing in the medical report, and they are aiming for a second win in a row.

Bayern committed suicide in the first game, losing a match from inside their hands. Andrea Trinchieri’s team was excellent and read the game plan correctly for the first three periods. But then, several severe mistakes in the last quarter had them leaving empty-handed for the locker room… Now, Bayern is called upon to gather the pieces (primarily in the psychological area) and react, which won’t be easy. Valuable guard Weiler-Babb (6.3 points, 3.2 rebounds, 2.2 assists) was injured in the first match and is knocked out for today 2nd game.