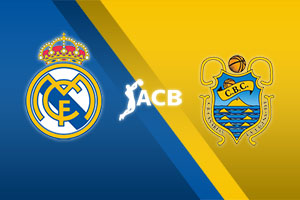 Many rushed and called Real’s season a failure, but the Madrilenians had two very “convincing answers” last week. The first one in Turkey, where they turned the derby against Fener into a friendly match. Thus they have now qualified for the Euroleague’s playoffs that for a few weeks seemed unlikely. The second one on Sunday afternoon: they escaped Barcelona victorious by beating Barca 87-85 for the ACB Liga. Argentine point guard Laprovitola led the way while talented Garuba and Vukcevic impressed with 11 points each. With this result, Real Madrid (record 28-1) locked the first place of the regular season and the absolute home advantage in the playoffs. Out of tonight’s game are valuable power forwards Trey Thompkins and Randolph. The big news for Pablo Lasso is that Real announced a few hours ago the French centre Poirier’s acquisition for the next 3.5 years. The big man left the NBA to return to Europe and get a leading role in the continent’s leagues.

Tenerife (currently at 23-5) counts nine consecutive victories in all competitions, knocking on the door of the 2nd place in the regular season of the ACB. At the same time, they are still in the game of the title in the Basketball Champions League (it has qualified for the Final-8). Butterfield (SG, 6.4 p) is out again, and that causes a slight headache for Vicorreta. At the same time, Tenerife’s latest acquisition, Charles Jenkins – you might remember him from Olympiakos BC, might make his debut tonight.

Our free Real Madrid vs. Tenerife tip: Over 20.5 total 3-pointers made in the game Bet Now!