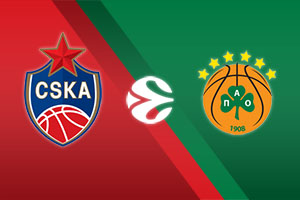 The regular season in this year’s Euroleague will end officially in a few hours, with the postponed game between CSKA and Panathinaikos for the 25th matchday. The Russians (23-10) have managed the 2nd place of the regular season, so Fenerbahce waits for them in the Final-8.

Simultaneously, the disappointing 6-time champions of Europe, Panathinaikos, ranked 16th with a miserable 11-22 record. On Monday, they disgraced themselves and their fans by losing 112-83 to Zenit of coach Pasqual in St. Petersburg. The Greens just wish for this seasons nightmare to end, but they will have to struggle for another 40 minutes against a much better team. The two massive franchises will play for the glory only. And this ain’t very common. The game starts in the early evening hours, and there is no interest in the win or the points differential.

The coach of the Russians, Dimitris Itoudis, will essentially line up his reserves, as in the list of injured players we can find names such as Hackett (8.8 points, 2.7 rebounds, 2 assists), Bolomboy (5.3 points, 3.9 rebounds), Milutinov (9.8 points, 8.6 rebounds), and CSKA’s first scorer, Mike James (19.3 points, 5.7 assists). The latter is no longer a member of the team.

On the other hand, for the Greens, playmaker Shelvin Mack returns for today’s game. Still, Panathinaikos’s mega-star, Croatian forward Mario Hezonja (14.4 points), has no right to play as his transfer happened after the game’s original scheduled date.