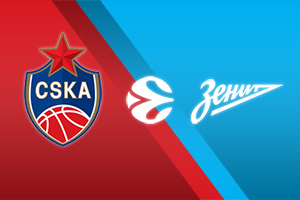 Three weeks after its victory over Zenit for the Super Cup final of the VTB League, CSKA will “host” again the team from St. Petersburg. CSKA is coming from outstanding performance and an important away win (100-96) over the holder of the Euroleague title, Anadolu Efes.

At the same time, D. Itoudis’ team has strengthened its roster in the effort to cover the injury of Serbian center Milutinov: CSKA has announced the signing of veteran American PF/C Kenneth Faried, a player with almost 500 career games in the NBA, including seven seasons with the Denver Nuggets.

It remains questionable whether the Lithuanian guard, Grigonis, will play tonight.

After their victory in the Euroleague opening match against Unics in Kazan, Zenit managed an important away win over Zalgiris in Kaunas (64-70). However, the team of the great coach Xavi Pascual cannot count on valuable American guard Shabazz Napier, who will return in 2-3 weeks.