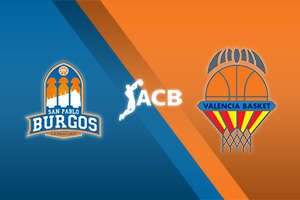 It has been a week without European competition games for Burgos (ACB record 3-2), as they had no obligation for the Basketball Champions League. Instead, Zan Tabak is preparing to face his predecessor, Joan Penarroya, who left for Valencia last summer. Burgos defeated Fuenlabrada on the road (91-96) last week. Five players had double-digit points, with Suleiman Braimoh scoring 18 points and collecting 8 rebounds. Alex Renfro excelled again and contributed 7 assists. All players are at the disposal of Tabak.

Joan Penarroya returns as an opponent to the place that he did an excellent job, as he led Burgos to 2 consecutive Basketball Champions League titles. The Spanish coach took with him to Valencia (2-3) Cuban center, Jasiel Rivero. The latter will have increased responsibilities against his old teammates since the other two team centres, Bojan Dubljevic and Mike Tobey will be absent due to injuries. Dubljevic was injured during last Sunday’s match against Real Madrid (79-93 defeat at home), while the American has been missing games for a long time. Klemen Prepelic (G) is also out, while Sam Van-Rossom (PG), will return to action after recovering from injury.