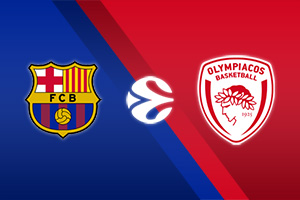 Barcelona that remains undefeated in both Euroleague (2-0) and ACB (6-0), welcomes tonight Olympiacos that is also undefeated in the Euroleague and the Greek league (2-0/2-0). The Reds have started the season furiously and appear determined to return to the playoffs of the top European competition.

The Blaugrana “escaped” from Munich last week (80-72 against Bayern), but it has been a tough win. Sarunas Jasikevicius had three of his players scoring double-digit points: Higgins (16 points, 5 assists), Davies (15 p.) and Mirotic (11 p.). However, Nick Kalathes did not go full throttle, finishing the match with 6 points, 3 rebounds, 3 assists, 4 steals and 4 errors.

Olympiacos’s second match of the regular season was a game full of answers against Real Madrid in Faliro. The team from Piraeus played a fantastic defensive game and achieved a fair victory (74-68). For the team of George Bartzokas, Sasha Vezenkov led the way, although he was off-target outside the 6.75 m. line (1 out of 7). The young forward finished the game with 16 points and 10 rebounds, 5 of which were offensive. Double-digit Tyler Dorsey added 12 points, 3 rebounds and 3 assists, while the leader of Olympiacos, Kostas Sloukas, ended the game with 9 points and 4 assists.