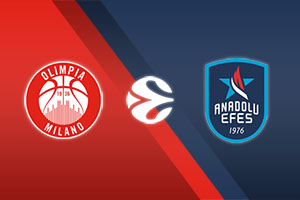 Armani Milan would love to start the season with a 4/4 record, but they need to beat the title holders of Anadolu Efes. At the same time, the Turks have found themselves in the opposite situation after starting the season with three consecutive losses.

Armani Milan seems very strong, though; On Tuesday, they defeated Maccabi Tel Aviv at home, after a straightforward game for them (83-72 final result/49-27 just before the end of the first half). Ettore Messina’s team relied once again on its tough defence, which was constantly at a very high level for at least three periods. Former NBAer Troy Daniels’s debut ain’t far in the future since the American seems to have overcome his injury.

For the first time in the history of the Euroleague, the titleholder starts the season losing all three first games. Efes, which “spread terror” last year, this year looks more vulnerable than ever after losing to Real and CSKA (at home) and Villeurbanne last Tuesday. Efes showed two faces in yet another game but could leave Astrobal victorious had Shane Larkin scored in the last possession. Unlike in the match against CSKA (where they returned from -16 and lost at the end in details), in France, Efes led by 19 in the 24th minute (56-37) but then collapsed defensively and conceded 38 points in just over 16 minutes. Croatian guard/forward Krunoslav Simon remains out of action.