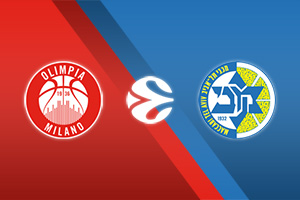 Armani has displayed a tremendous defensive game at the beginning of the season, which made their life very easy in Vitoria. The Italians defeated Baskonia 78-64 and reached a 2-0 record.

The work was done mainly by Shavon Shields (12 points, 10 rebounds), Malcolm Delaney (13 points, 4 assists), Devon Hall (12 points) and Nicolo Melli (10 points, 5 rebounds, 3 assists). Unfortunately, Ettore Messina still does not have at his disposal American scorer Troy Daniels, who has not played yet due to injury.

Maccabi “escaped” the first game against Bayern with an unusual inspiration from its leader Scottie Wilbekin and won 69-68 at home. However, during the second game against Crvena Zvezda, the Israelis showed all their weaknesses and lost in front of their fans (63-75!).

As a result, voices of complaint were heard for the first time from the stands, criticizing the choices of Greek coach G. Sfairopoulos, who remains at the bench for the 3rd year in a row. Injured center Ante Zizic remains out, but his replacement, Frenchman Mathias Lessort, performs better than perhaps expectedly.