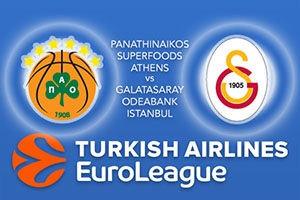 The hosts come into this game with a 5-5 record and while the Greeks will be hoping to improve on this standing, it is actually better than the 3-7 record that is held by their opponents. You can always guarantee that there will be a feisty match in store when Greek and Turkish teams clash, and this is exactly what is in store for this Euroleague game on Friday night.

Galatasaray started their campaign with 5 defeats in a row which means that they are 3-2 in their 5 most recent games. The team is yet to win on the road this season and this is likely to be a tough match. Justin Dentmon has been a big player for the Turkish side so far this season, offering an average of 12.3 points per game while Sinan Guler has offered an average of 10.8 points per game so far this campaign. The Turkish side are not well known for being a strong defensive unit but in their two most recent outings, they have limited their opponents to less than 70 points per game.