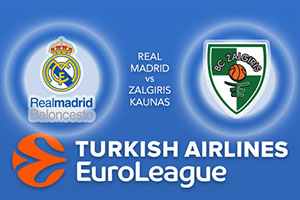 Madrid lost out in their most recent game, falling by a single point in Istanbul against Fenerbahce last week, but they had enjoyed three wins in a row before that game. Zalgiris can also boast of three wins out of four so this is a Euroleague game between two sides that are in relatively decent form coming into this match. Home advantage should count for a lot, and Madrid’s 7-3 record is ultimately more appealing than Zalgiris’ 4-6 record, but this could be a decent game and the basketball betting action is worth checking out.

One thing that will inspire confidence in the hosts is their 13-1 record against their opponents in the Euroleague. The Spanish side have managed to win the last six meetings between these teams and they’ll be confident of a good win in this game. Madrid have the November MVP in their ranks, with Sergio Llull grabbing an average of 18.9 points per game and he has received support from Jaycee Carroll with an average of 10.5 points per game while Rudy Fernandez has provided an average of 9.3 points per game. Madrid have more than enough good players to make a difference and they really should see this game through on Thursday night.

Kaunas have picked up in Euroleague recently

Kaunas are currently ranked 11th in the table and their 4-6 record is indicative of the season they had. The fact that they have managed a few wins in recent weeks will be of great relief to the club and their fans, but they know that this game is likely to be a very difficutl challenge. However, over the course of the season, there should be enough for Kaunas to at least challenge for a safe position in the middle of the table although the new format of the Euroleague may leave the team feeling as though there are a lot of pointless games near the end of the campaign. Brock Motum has been in good form this season, offering an average of 13.2 points per game while Paulius Jankunas has grabbed an average of 12.8 points per game so far this season.