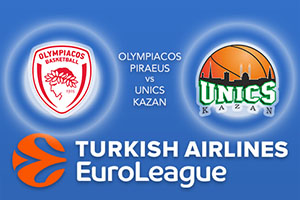 On paper, the hosts should be able to take control of this game on Friday night but it hasn’t been plain sailing for the Greek side so far this season. Olympiacos Piraeus have a 6-4 record going into this game while the side from Kazan carry a 3-7 record. This is the first time these two sides have met so there will be a little bit of history in the Euroleague this week and with both teams winning their last game, confidence should be high in this clash.

Unics Kazan can win away in Euroleague