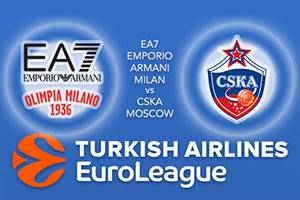 The hosts come into this match on the back of a three-game losing streak. You would maybe feel that a home game is the ideal way to get back to winning ways but now when you come up against a side that carries a 9-1 record for the season so far. Milan know that they are in for a tough evening in the Euroleague when CSKA Moscow come to town.

Moscow are doing fantastic in Euroleague