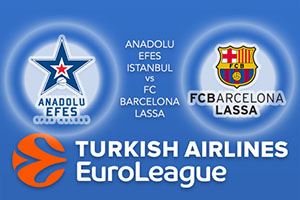 Both teams hold a 5-5 record but the way the teams have earned this record is very different. The hosts have a focus on attacking play and they have worked hard to be offensive this season. Barcelona have had a share of injuries to key attackers so far this campaign and they have been reliant on their defence. This means we have a game of attack versus defence and it is not just basketball betting fans who will have fun watching who comes out on top.

Both sides are tied in sixth place at the moment and they’ll both believe they can rise up the table this midweek. The hosts have broken into double figures in their last two home games and their average points tally at home so far this season stands at 96.5 points per game. That is a tremendous record and it will give the home team and fans plenty of encouragement in Istanbul on Friday night. Derrick Brown has been in fine form this season, offering an average of 13.5 points per game while Thomas Heurtel has chipped in with an average of 12.6 points per game so far this campaign.

FC Barcelona have been strong defensively in the Euroleague

Barcelona’s strength lies in their defensive work and they have allowed an average of 73.7 points per game against them this season. Tyrese Rice has been an instrumental figure for the Catalan club so far this campaign, providing an average of 15.8 points per game while the most important team news may be the return of Victor Claver and Justin Doellman from injury. There is no doubt that Barcelona have underperformed so far this season but this is a game where they can win, if they stand up and be counted.

There isn’t a lot between these teams at the moment but take FC Barcelona Lassa at +3.5, which is available at odds of 1.86. If you are looking for the Over/Under market in this Friday night Euroleague game, look to go UNDER 157.0 at odds of 1.90. Bet Now!