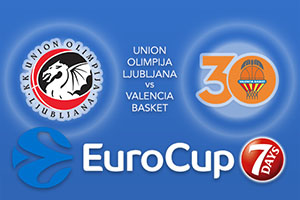 The hosts play their final regular game of the Eurocup season and because they are bottom of Group D, this is also their final Eurocup game of the season. When you have a 1-6 record going into your final game, it is obvious that things haven’t gone that well and it has been a difficult campaign for the side from Ljubljana. They face Spanish opponents with a 5-1 record so the basketball betting opportunities look obvious in this game.

When the two teams clashed in Spain last month, Olimpija went down by a score line of 87-74 and they’ll know it will be difficult to obtain revenge for that loss. One player that has been bright for Union is Mirko Mulalic, who has offered an average of 11.3 points per game so far this season. The other two Union players to make it into double figures are Nikola Jankovic, who has provided an average of 10.7 points per game and Brandon Jefferson, who has offered up an average of 10.3 points per game. There are times when teams who have nothing to play for find freedom that they didn’t have at other times in the season and this is what the home fans will be hoping for in this game.

Valencia are doing well in Eurocup

Valencia are still looking to book top spot in the group and a win here would go a long way to making them feel right at home. They already know they can beat Union and they’ll be keen to complete the double. The Spaniards best player for points so far this season has been Fernando San Emeterio, who has provided an average of 11.5 points per game. He has been supported by Rafa Martinez, with an average of 10 points per game and Antoine Diot, who has offered up an average of 9.8 points per game. These players will definitely fancy their chances of improving their tallies when it comes to this match on Wednesday night.