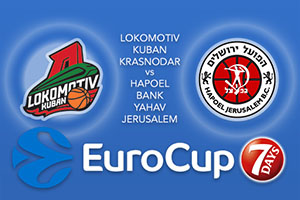 Both of these teams are already assured their place in the Top 16 of the Eurocup but the final placings of Group D are still to be determined. This means we should have plenty to play for in this game and this means that there will be some basketball betting options available to choose from in this Wednesday night game.

The hosts have a 2-4 record and are currently looking like taking the fourth place in the group but a win here could make a difference. With the away side holding a 4-2 record, and a win in the last clash between these sides, Hapoel hold an advantage heading into this game but the hosts know that a win by over 12 points could help them to move upwards in the table. Lokomotiv have been boosted by the form of Taylor Rochestie who has managed to provide an average of 14.6 points per game this season while Mardy Collins has offered an average of 12.5 points.

Hapoel have plenty to play for in Eurocup

The side from Jerusalem still have a chance of topping Group D in the Eurocup so they should be motivated for this game. They know that they have what it takes to defeat Lokomotiv but it is never going to Krasnodar so we could be in for a much tighter game than the previous clash which finished 90-79 in favour of the Israeli side. Curtis Jerrells has been in good form this campaign, offering an average of 16.7 points per game while he has been backed by Jerome Dyson, who has offered an average of 12.8 points per game so far this season. There has also been support from Tarence Kinsey who has provided an average of 11.2 points per game this campaign.

This could genuinely go either way but the Jerusalem side has a big incentive to play well and get a win, so take Hapoel Bank Yahav Jerusalem at +4, which is available at odds of 1.90. Anyone looking for the Over/Under market should go OVER 155.0 at odds of 1.90. Bet Now!