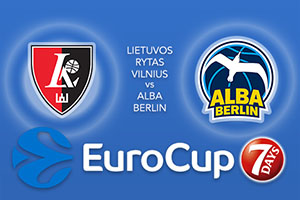 Group B is definitely the Eurocup group to keep an eye on as there are still three places up for grabs in the Top 16. All of the other groups already know which teams will progress and which teams will drop out, only the final orders have to be decided, but Group B is the one that has plenty to play for. All of which means this is the Eurocup group with plenty of basketball betting options to look forward to.

The hosts are sitting with a 3-3 record and their three wins have all come at home. This means that they are looking for their fourth home win in a row and if they get it, they are guaranteed a place in the Top 16. That should be all the incentive they need but they know that this is going to be a tough match. When these two sides clashed in Germany earlier this season, the final score read 124-115 in favour of Berlin but it was a titanic struggle. It took two periods of OT to split the teams so the side from Vilnius will also have revenge on their mind. David Logan is the third top scorer in the league at this point in time, averaging 19.7 points per game, and if he is on fire, it could be a good night for the home fans.

ALBA Berlin finish their Eurocup regular season in this game

Logan is on fire but the second top scorer in the league is also on the court in this game with Elmedin Kikanovic, with an average of 21.3 points per game playing for ALBA Berlin. The Germans are playing their final game of the regular season in this match and they know that a win will guarantee their progress into the Top 16. This makes this game one that really does have everything to play for. The Germans won the last encounter but the close and drawn-out nature of that game means that they won’t be able to take too much for granted.