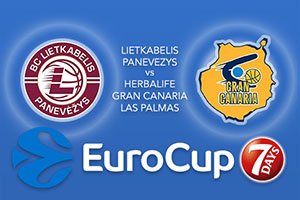 Both of these teams are assured of a place in the next stage of the Eurocup but this game could have a big influence on who finishes where in Group A. A win for the away side will see them top the group while that result would see the hosts condemned to finish in fourth spot. There will be a few basketball betting opportunities on offer in this game but everyone should be able to take a lot of excitement from this match.

The hosts have been up and down to this stage in the Eurocup so far, but they’ll see this as an opportunity to play. Some teams play much better when the pressure is off and with a spot in the Top 16 already assured, the hosts can open up and play with confidence. Of course, they will need to be wary of a strong opponent but this could be the sort of game where Lietkabelis Panevezys step up. Ksistof Lavrinovic has provided an average of 12.7 points per game this season, while Zygimantas Skucas has provided an average of 11 points so far this season.

Gran Canaria have enjoyed the Eurocup so far this season

The away team has a great incentive to play in this game and you should back Herbalife Gran Canaria Las Palmas at -8.5, which is provided at odds of 1.90. You can take the Over/Under market by going UNDER 170.0 at odds of 1.90. Bet Now!