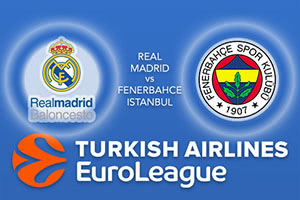 The last two Friday night games in the Euroleague are all about the top teams in the league. The teams battling it out for top spot are in completion against the teams who are battling it out for fourth spot and this means that there is a great deal of drama and excitement in the area, even if there ultimately isn’t too much at stake. Panathinaikos and CSKA Moscow have the slightly earlier start but their game will be in play when Real Madrid, with a 21-7 record, step on to the court to take on Fenerbahce Istanbul, who have a 17-11 record.

The hosts know that regardless of what happens in the other game, a win for Madrid keeps them on top of the group. There is also the fact that if Moscow lose their game, a Madrid win will see them clinch top spot in the table which means that there could be a fantastic climax to this game for the home fans. Of course, if Moscow win, Madrid know that they need to win themselves in order to stay on top and with the Turkish team having plenty to play for, this may not be as easy as you would think.

Fenerbahce have struggled of late and they have lost three of their four most recent games but they are still in the final home-court advantage space. If the Turkish team loses, they know that Panathinaikos and Baskonia are breathing down their necks. Then again, if results go in the Turkish side’s favour before the step on to the court, an away win in Madrid could see the Istanbul side clinch fourth spot. There is a great deal at stake in this game but at this point in time, we don’t quite know what is at stake.

When these two sides met earlier in the season, it was the Turkish team that took it and it was a thrilling game. The match finished 78-77 and it went to the wire with James Nunnally grabbing the late winner with a free throw. The Turkish team have defeated Madrid on the last four occasions these sides have met, so that is something both teams will have in mind heading into this game.

The hosts should have enough to take this game so back Real Madrid at -6, which is available at odds of 1.90 and if you are looking for the Over/Under market, you can go OVER 160.0, which is also provided at odds of 1.90. Bet Now!