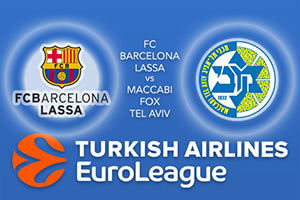 Both of these teams have a strong Euroleague pedigree but they have both endured a terrible season. This is why Barcelona and Maccabi will probably be quite glad to see the back of this Euroleague campaign but there are still a couple of games to get over and done with. Injuries have caused no end of problems to the hopes and ambitions of these sides but there is certainly a desire to bounce back stronger next season, and both teams will want to win this game and at least give their fans something to cheer at the tail end of the campaign.

Maccabi have not enjoyed this year’s Euroleague

It is very difficult to predict how these games will go because both sides have been hugely inconsistent this season and now that they have nothing much to play for, motivation may be at an even lower level. Home advantage may have some impact and with that in mind, take FC Barcelona Lassa, at -7.5 at odds of 1.90. If you’re looking for the Over/Under market, go UNDER 157.5 at odds of 1.90. Bet Now!