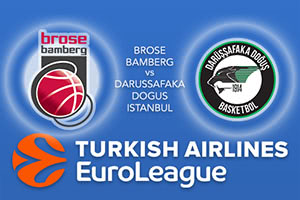 While there are plenty of Euroleague games that have a lot to offer this week, this is one of the few that really has something at stake. The away side come into this game with their Euroleague playoff destiny in their own hands and if the Turkish side wins their two remaining regular season games, they will be involved with the playoffs. Of course, that may be easier said than done and the Istanbul side will definitely not find things easy in Germany against a Bamberg side who have been going out fighting.

Brose Bamberg are out of the running when it comes to the Euroleague playoffs but they have won their last two games on the road. As this is the German’s final home game of the season, they will look to put on a positive display for their fans and this is the factor that could make life very difficult for Darussafaka on Thursday night.

In the earlier meeting between these sides this season, it was the Turkish team that triumphed on home soil, grabbing a 72-70 win. Will Clyburn offered up 17 points in that game while Nicolo Melli managed to chip in with a double-double in that win.

Darussafaka are desperate for a Euroleague road win on Thursday evening