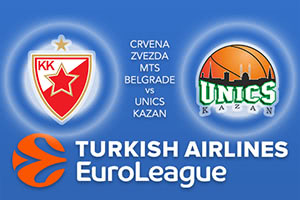 If Darussafaka had lost on Thursday night, this game would have been a chance for Belgrade to clinch their playoff spot but that hasn’t panned out. The Turkish side grabbed a win by a score of 97-99 so that hasn’t worked out in this manner and with Belgrade heading to Turkey next week to take on Darussafaka, this game doesn’t really matter too much. That is because it is going to be a winner takes all clash due to the respective records of both sides. This may temper the excitement for this game but as you’d expect with the Euroleague, both teams will be desperate to grab a win.

The away team definitely want to grab a win because they have lost their last 12 games in a row! This is all the more striking when you take on board the fact that Kazan have the top scorer in the Euroleague. Keith Langford has chipped in with an average of 22.3 points per game, and he is a player who could be in massive demand this summer although Kazan will be desperate to hang on to him. Langford will be up against one of the tightest defences in the league with Crvena having only given up an average of 73.6 points per game, leaving the side from Belgrade standing with the second best defence in the Euroleague.

Kazan have struggled in the Euroleague

The Belgrade side are struggling for form at the moment and they will be desperate to grab a win to get them back in better shape for the game next week. Having lost three out of four games, there will never be a better time for Zvezda to find form again. Marko Simonovic has provided an average of 12.7 points per game while Ognjen Kuzmic has offered an average of 9.4 points per game.